Free entrance, the performance will end at 9pm

Manufactory is a performative installation project based on the history of change in work patterns: starting with craftsman’s practice, it then follows a chronological progression to end with the routine pace of factories and production lines. A live installation and stage performance which combines video, physical theatre and music, it reflects the rhythms and materiality of labor and repetitive action. In their signature style, Transforma film and project this process live, condensing single scenes into stylized vignettes. The score takes the form of a series of phasing loops that both respond to and trigger the performers’ actions. This unique live installation will premiere in September 2018. A work in progress version of the performance will be presented at Mapping Festival.

Devised and directed by the artist group Transforma together with choreographer Johanna Hwang, Manufactory re-imagines the factory floor as an intimate stage set and condensed interpretation of the history of manual labour through live video, physical choreography and sound. In an in the round stage situation, 4 performers or workers perform repetitive, choreographed tasks in a production line setting. 4 screens installed around the work-space show a stream of live camera images capturing details of the production process. Microphones amplify the sounds and actions created by the workers’ actions and ‘feed’ the musical score. Situated within a stage design which serves the functionality of the work, the tasks are based around core raw materials and goods (earth, wood, polystyrene…) and range from precise sorting to more physical labour. Working in unsyncopated shifts, workers sift, shovel, mix, sort, pack and unpack the various materials in a choreography of process.

The process of work will be filmed live by a series of cameras – allowing the audience a condensed detailed view of each task, isolating single gestures into micro-performances in their own right. By shifting the focus, these images – condensed and stylised, create vignettes of otherwise imperceptible moments. Sound cycles will react to the workers’ actions – each cycle never repeating due to varying production styles and speed of work. In turn, the score will trigger cues for the performers to follow. The resulting series of phasing loops will dictate the core tempo of the piece to create a system of interdependence.

Transforma are a visual artist collective who have gained a reputation for their approach to creating original audiovisual performances, installations, projections for music, and have worked extensively with theatre and dance. Creating images and atmospheres which establish a connection between the material properties of their subject, abstract storytelling and a hands-on approach to production, they have developed their own language within the live visual experience. They have long standing collaborations with numerous artists, directors and musicians and have performed live and exhibited at many major festivals and venues around the world. Transforma was formed in 2001 in Berlin by Luke Bennett, Baris Hasselbach and Simon Krahl.

Manufactory is supported by ENCAC (European Network for Contemporary Audiovisual Création) and co-produced by the Barbican Centre (London). 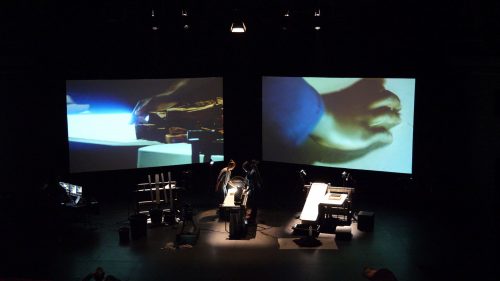 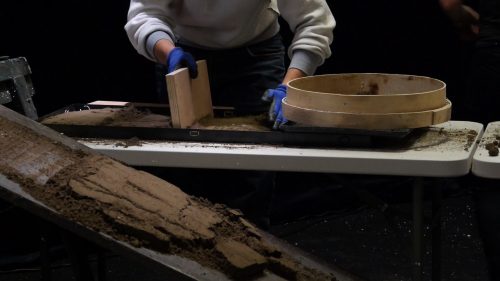